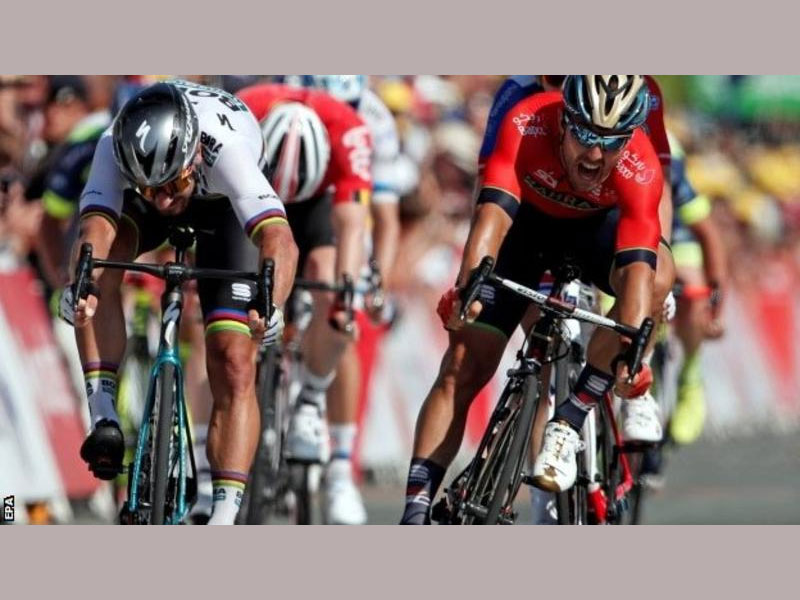 The Briton had lost 51 seconds to some of his main rivals after a crash in the opening stage but his team's efforts against the clock around Cholet put him back in contention.

Tom Dumoulin led the way for Sunweb, putting in a big shift over the early climb and another onto the final run-in, before swinging off for Michael Matthews to lead them home 11 seconds in arrears to BMC Racing.

Team Sky, another unusual early starter, were booed by roadside spectators throughout their effort but posted nearly identical times through the first two time checks - as did BMC Racing, who also found themselves in an unfamiliar early start time.

World champion Peter Sagan said he had three reasons to be cheerful as he won stage two and took the overall leader's yellow jersey in front of family and friends from Slovakia at the Tour de France on Sunday.

Though they regrouped quickly, with Philippe Gilbert now their yellow jersey hope, they could not make back the time they lost as they finished third on the stage.

Australian Richie Porte, who had also lost 51 seconds in the first stage after being delayed behind a pile-up, benefited from his BMC team's performance to move up to 14th, four seconds ahead of Froome.

"There was way too much wind for me", said the slightly-built Porte.

Wrong! The Tour de France's stage 3 TTT was an important part of the battle for the yellow jersey.

"It was a huge challenge for the team, it's been incredible for us", said the 33-year-old Briton who was jeered when his name was announced on the starting ramp.

That meant that Froome, Yates and BMC's Porte were all able to take a chunk of time back on several key rivals after suffering losses on stage one.

Movistar lost 53 seconds, which leaves Colombian Nairo Quintana, twice runner-up, 1:13 behind Froome - a massive amount of time after only three days of racing.

The Tour heads into the cycling hotbed of Brittany on Tuesday for Stage 4, a mostly flat 195-kilometer leg from La Baule to Sarzeau that starts and ends on the Atlantic coast.