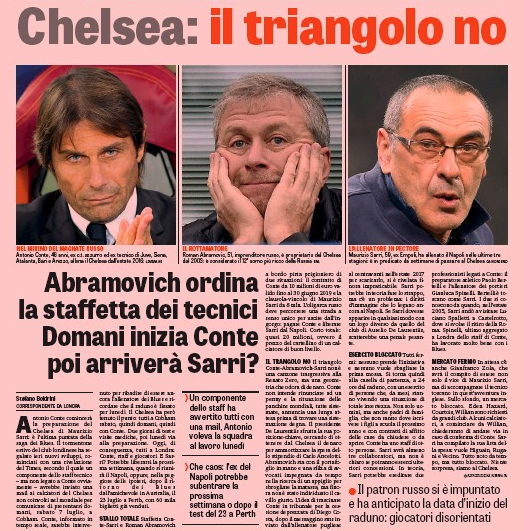 Yet disputes regarding compensation and the sacking of current Blues boss Antonio Conte is slowing that managerial change down. And even after winning the FA Cup against fierce rivals Manchester United in the final, Conte was still seen as a dead man walking at Chelsea. However, a contractual dispute with Napoli has reportedly prevented Chelsea from snapping Sarri up, leaving Conte at the helm after he regularly challenged the hierarchy's authority with comments about their transfer policy in the most recent campaign.

Whilst a deal remains tentatively in place with the Cityzens, a formal agreement has yet to be reached between the two clubs, although the Brazilian-born Italian is said to have already agreed personal terms.

There have been plenty of reports that have linked Conte being sacked from Chelsea this summer with a number of different managers set to take up the potential job if a vacancy arises.

Conte surprisingly took charge of training on Monday at Cobham despite the uncertainty surrounding his future, while it has been claimed that Manchester City are bracing for the prospect of missing out on Jorginho and lining up alternatives.

However, the London Evening Standard says Sarri is the one who has approached Zola about a return to Stamford Bridge and not a member of the club's hierarchy.

The prolonged uncertainty surrounding Conte and Sarri has had a paralysing effect on Chelsea's transfer plans in a window already complicated by the World Cup and compressed by the Premier League's earlier deadline, set for August 9.