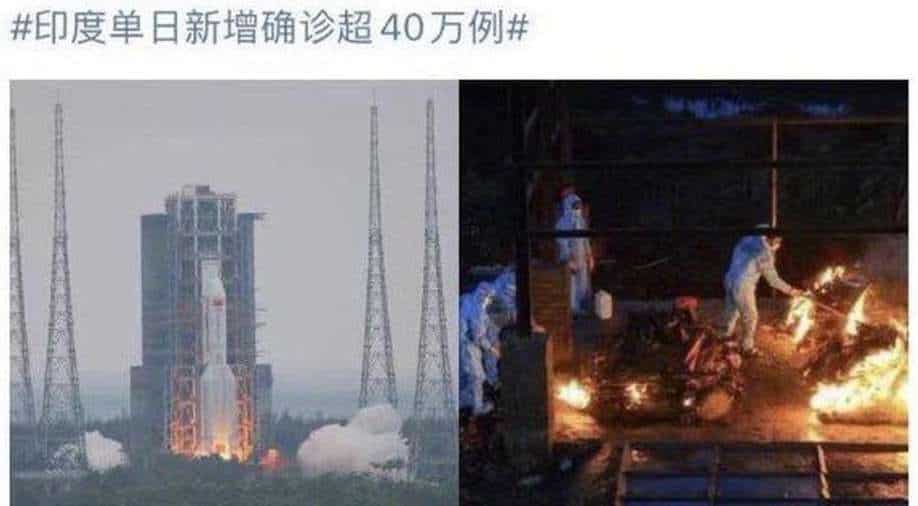 The post, which appeared on Saturday afternoon, has since been deleted.

A social media post by the Chinese Communist Party's Central Political and Legal Affairs Commission faced serious backlash for appearing to mock the COVID-19 crisis in India, a report said.

The account on Weibo, China's Twitter-equivalent, shared two images side-by-side of a rocket launch in China and a cremation ground in India, adding a message: "China lighting a fire, India lighting a fire".

On Sunday, India recorded a daily coronavirus death toll of 3,689 - the highest since the pandemic began.

The official account of China's Ministry of Public Security posted a separate image on Friday that compared the country's "fire god mountain" - the name of its makeshift hospital built to combat Covid-19 in Wuhan - with another mass cremation in India, according to Bloomberg. Many Chinese social media users expressed shock and anger at the insensitivity of the post.

The editor of a website that tracks trends on Weibo told Bloomberg that she did not believe there was "consensus on this post or else it would not have been removed so quickly". It too was criticized, with social media users saying it was "morally problematic". A border dispute that killed dozens previous year and hurt economic ties between the two nations has fanned nationalistic sentiment in both countries. Some see India's intense coronavirus battle as an opportunity for China to ease tensions with its neighbor.

India reported more than 300,000 new Covid-19 cases for a twelfth straight day on Monday, taking its total caseload to near 20 million.

Chinese Foreign Ministry spokesman Wang Wenbin also stated that the Chinese Red Cross Society and various governmental and non-governmental organizations are "trying their best to collect the anti-epidemic supplies urgently needed by India, and deliver them to the Indian people as soon as possible".

Medical experts say actual numbers across the country of 1.35 billion may be five to 10 times higher than the official tally.

Cricketers among Australians stranded in India
One doctor told Australian TV that the government's move was disproportionate to the threat posed by those returning from India. It's intensified calls for more to be done to get Australians home, reports the BBC's Frances Mao from Sydney.