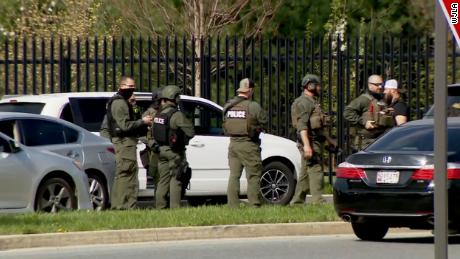 Police respond to the shooting in Frederick Maryland on Tuesday morning

Earlier on Tuesday, police said that two people were injured as a result of a shooting incident in the city of Frederick in western Maryland, US, police said, adding that one suspect was down. He said after that shooting the suspect drove about 10 minutes to Fort Detrick and was killed there.

Police had been called to the first scene, about a 4-mile drive east of Fort Detrick, around 8:20 a.m., Lando said.

In a press conference Tuesday, officials with the Frederick Police Department confirmed that two adult male victims were injured in a shooting at the Riverside Technology Park in Frederick.

Both men who were shot in Frederick were flown by helicopter to the University of Maryland Medical Center in Baltimore and are in critical condition at the facility's Shock Trauma Center, Lando said.

The police chief said it is a "very active scene" and did not want to comment on motive.

"The public is no longer at risk, everyone is safe".

Special agents with the Bureau of Alcohol, Tobacco, Firearms and Explosives are responding to assist, the ATF's office in Baltimore said on Twitter.

This is a developing story.