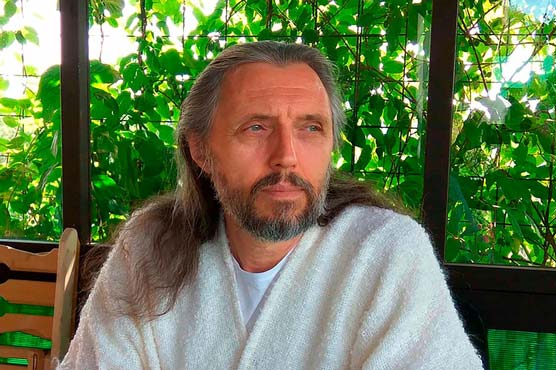 Helicopters, dozens of vans and buses were deployed in the raid on the so-called "City of Sun", home to the Church of the Last Testament, in Siberia on Tuesday.

The Investigative Committee said in a statement that Mr Torop is suspected of "taking funds from citizens by using psychological pressure on them in order to make profit from religious activities". Russia's Investigative Committee said the men were being charged with organizing an illegal religious organization for allegedly extorting money from followers and emotional abuse.

He lost his job as a traffic officer in 1989 and founded the Church of the Last Testament in 1991.

Two other members of the cult, known as the Church of the Last Testament, were also arrested, including a former Soviet-era boy band drummer called Vadim Redkin.

The men could face up to 12 years in prison if found guilty, according to the RIA news agency.

A cult leader who calls himself as the reincarnation of Jesus has apparently been arrested in Russian Federation.

Russian security agents have conducted a sweeping raid on an isolated messianic cult and arrested its leader, dubbed "Jesus of Siberia", who was at the helm of the group for almost three decades.

The group rejects modern technology, calling for living in harmony with nature, barring its members from using money, drinking alcohol or smoking. "Everything that God wants to say, he says through me". The agents can be seen placing its leader Vissarion Christ the Teacher, whose followers believe that he is the reincarnation of Jesus of Nazareth, inside one of several helicopters deployed in the raid.

In an interview with the BBC three years ago, Torop said: "We have a school of noble maidens here. We're preparing girls to become future wives, future brides for worthy men", adding that women have "to understand not to rise above the man, not to be proud of her independence but to be shy, inconspicuous and weak".

Torop is reported to have two wives with six children.

He said God had sent him to Earth to teach mankind about the evils of war and the havoc we were wreaking on the environment.