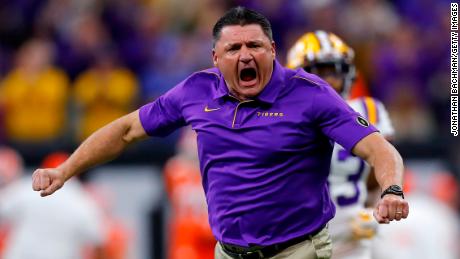 LSU head coach Ed Orgeron said Tuesday that the majority of the players on his team have contracted the COVID-19 virus.

Sports Illustrated reported earlier this summer that at least 30 members of the team have been isolated because they either tested positive for COVID-19 or had contact with at least one infected individual.

Orgeron's comments come on the heels of Texas Tech self-reporting five more cases of COVID-19 on Monday, bringing the team's total number of positive cases to 75 since players returned to campus in June. "We look at the players who haven't caught it; we talk to them about being very, very careful so they're eligible for games".

Orgeron goes on to say he hopes that this means his players will be unable to catch the novel coronavirus a second time, and that they won't have to miss any games. "So hopefully they won't catch it again, and hopefully they're not out for games".

Since then, the school has confirmed more than 750 COVID-19 cases, with 50 positive cases from September 11 to September 13. But we know that the players that haven't caught it, we have to have some backups in their position ready in case they catch it.

"You have to make adjustments", he said.

Orgeron says just two weeks ago, most of his offensive line was decimated by the coronavirus.

LSU opens their season with the rest of their conference on Saturday facing off against Mississippi State.