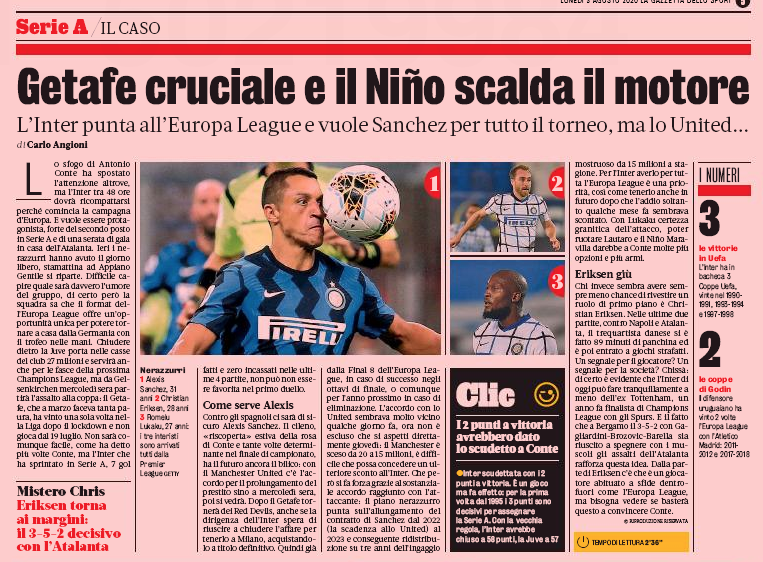 Inter have confirmed the signing of Manchester United forward Alexis Sanchez on a permanent deal.

This season he has made 30 appearances across all competitions to date, in which he has scored four goals and tallied 10 assists.

After shining at Arsenal where he proved to be one of the most deadly forwards in football, there was plenty of expectation on his shoulders after sealing a swap deal to United with Henrikh Mkhitaryan going the other away.

Manchester United will have one less thing to worry about with Alexis Sanchez permanently moving to San Siro.

When asked about a potential Sanchez move after LASK Europa League win, Solskjaer said: "I can confirm that he's agreed and we've agreed. Alexis enjoyed his time there they have liked him so that's a good move for him", Sky Sports quoted Solskjaer as saying.

Sanchez's time at United cost the club in excess of £40m in wages, including the £175,000 a week they were contributing to his salary while on loan at Inter, with that enormous outlay further swollen by the final settlement bill.

Inter expect to have Sanchez available for the Europa League "final eight" in Germany after Antonio Conte's side beat Getafe on Wednesday.

While the Sanchez situation will come to an end on Thursday, United's pursuit of Jadon Sancho shows little sign of being concluded anytime soon.

It's believed Sanchez is being moved on for free but that he would officially be off the club's wage budget.

Sources have told ESPN that United have handed Sanchez a "small" pay-off and club chiefs are satisfied with the conclusion of the 31-year-old's disastrous spell at Old Trafford.

"He knows what we want from him and he knows he has to stand by the manager whatever decision he makes".