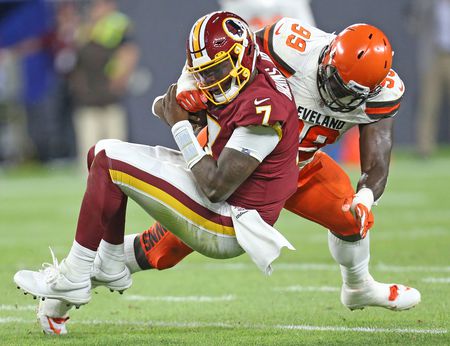 The Washington Redskins are closing in on a change of nickname

The Washington Redskins, who have seen the pressure to change the team's racially-charged nickname dramatically increase during the past few weeks, will announce Monday that they are retiring the name, according to reports.

The letter and accompanying social pressure seem to have prevailed upon Snyder, as the team announced on July 3 that it would review the team's name with an eye toward a possible name change.

The statement said team owner Dan Snyder and head coach Ron Rivera were working closely to design a new name and logo. While it's uncertain what the next name will be, it is one a source close to the situation said Snyder was excited about.

The new team name and logo are still in deliberation and have not yet been revealed.

Washington announced Monday that it will retire the "Redskins" nickname and logo. Robinson said Saturday the change would come "in the next 24-48 hours", adding "the National Football League is starting to take steps to tell everybody who has Washington's nickname on its platform to start scrubbing it, start taking it off, which means something's coming". The team also last month removed Marshall's name from all of its official material, including their Ring of Fame, history wall and website.

The NFL team in Washington D.C. will finally drop the word "Redskins" from its name, reversing decades of refusal from team ownership amid criticism dating back to the 1960s.

Snyder has long ignored requests of Native American tribes and other organisations to change the name.

"A whole new generation of fans of Washington NFL football will have a team name and mascot they can be proud of", she added. Pepsi, Bank of America and Nike later joined with their own public statements, and NFL Commissioner Roger Goodell also said he was supportive of the review.

"It's that simple. NEVER-you can use caps", Snyder said. That review came on the heels of big-money corporate sponsors threatening to sever ties with the franchise if it did not change its name.

Richard "Doc" Walker, a former tight end who played for the Washington Redskins from 1981 to 1984, has recently garnered some attention with his suggestion for a new name for his old team. The current logo shows the profile of a red-faced Native American with feathers in his hair. "This is a good decision for the country - not just Native peoples - since it closes a painful chapter of denigration and disrespect toward Native Americans and other people of color".