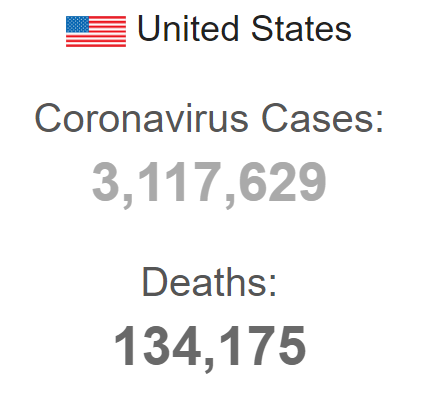 The U.S. surpassed the grim milestone on Wednesday morning.

As the country began reopening, many states "jumped over the benchmarks", Fauci said, referring to indicators of a slowing infection rate required for states to begin phasing out of lockdowns.

The Maryland university's tally counted 3,009,611 confirmed infections and 131,594 fatalities in the U.S., while 936,476 people have recovered from the disease since it first appeared.

The US remains by far the worst affected country, with over 132,256 deaths.

Medical personnel work at a COVID-19 testing center on July 7, 2020 in Austin, Texas.

Hospitalizations linked to the virus across the county have risen slightly in recent weeks and have spiked in states where the virus appears to be spreading quickly. A number of states and cities have also introduced ordinances requiring masks in public places.

The US has the most recorded cases of the disease in the world, with 3.1 million cases and 133.195 deaths, according to Johns Hopkins.