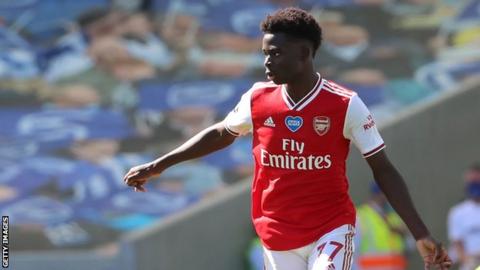 Arsenal tied down Bukayo Saka to a long-term contract on Wednesday, ending speculation over the highly-rated teenager's future.

He has made an impressive impact this season and made 34 first-team appearances since his debut in the Europa League in November 2018.

Saka's previous deal was due to expire next year, with Liverpool and Chelsea reportedly keen to take advantage of any breakdown in contract negotiations.

Saka was handed his Premier League debut by former manager Unai Emery in a 4-1 win against Fulham on January 1, 2019.

"This is something everyone involved wanted to happen and we are delighted that Bukayo has signed a new long-term contract".

Arsenal's technical director Edu said: "This is so important for us as we move forward as a club". Arsenal's boss Arteta will be hopeful that Chambers will be fully fit by the time next season begins since he won't be able to play in this year's campaign since he ruptured the anterior cruciate ligament of his left knee.

"Bukayo is a talented and intelligent young player", said Arteta. "The hard work continues so I can continue living my dream".

"I am excited to continue working with him to develop him further, and for him to help us achieve our goals".