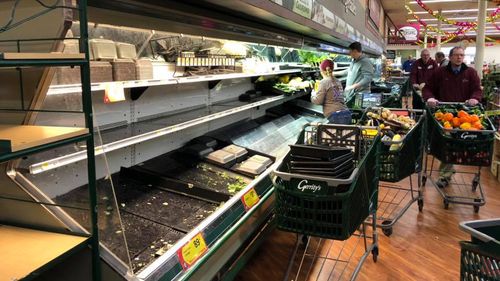 Joe Fasula, the co-owner of Gerrity's Supermarket in Hanover Township, said the unnamed woman visited the store on Wednesday at around 2:20 p.m. and then coughed on fresh produce, at a bakery, a meat case, and other items.

Fasula said his staff did its best to escort the woman out of the store as quickly as possible.

Fasula says the woman is a "chronic problem" in the neighbourhood, and he has little doubt that she was pulling a "very twisted prank" when she coughed on various products on Wednesday afternoon.

Writing that he is "absolutely sick" to his stomach about the loss of food, Fasula also noted in the post that the chain estimates the loss of groceries to cost at least $35,000 total and that it is unsure if its insurance company will cover the cost. Fasula wrote. "While it is always a shame when food is wasted, in these times when so many people are anxious about the security of our food supply, it is even more disturbing".

In the post, which was accompanied by pictures of empty shelves, Fasula detailed how the store worked with a Hanover Township health inspector in order to identify "every area" the woman had passed through, as they disposed of the products and "thoroughly cleaned and disinfected everything".

Officials across the states are taking threats of spreading coronavirus seriously. A New Jersey man caught coughing on a Wegmans employee on Tuesday was charged with making terroristic threats, obstruction of law and harassment, according to the New York Post. "Who's scared of the coronavirus?" he asked in the clip, according to The Daily Beast.

That man's attorney called the action "immature. tasteless and impulsive" but said it happened before the World Health Organization declared the virus a pandemic, the Post-Dispatch reported.

The Centers for Disease Control and Prevention say the potentially fatal coronavirus can spread via "respiratory droplets produced when an infected person coughs or sneezes" on nearby people or objects.

But as customer visits to grocery stores spike and consumers continue to hoard supplies, industry groups fear that the U.S. food supply will eventually dry up, too.

We'll never understand why, in a time of crisis, a human would do this to fellow humans. This required the extra work of 15 store employees. Others have beefed up security and installed off-duty police officers or private guards to manage crowded aisles and jammed parking lots.