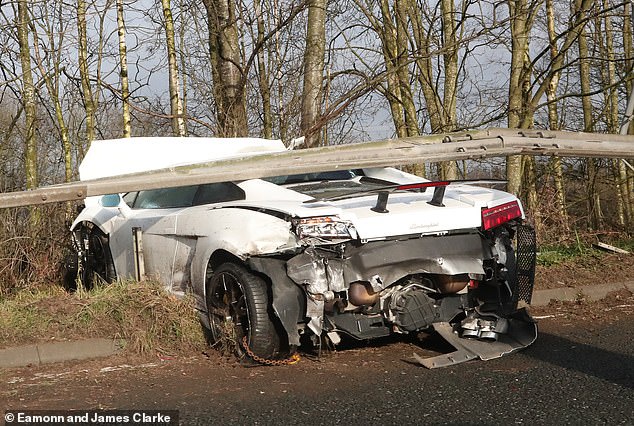 Manchester United goalkeeper Sergio Romero was pictured waving for the cameras as he arrived for training just 24 hours after crashing his £170,000 Lamborghini.

According to the Daily Mail, the auto worth 170,000 British pounds (221,000 USA dollars) was owned by the United's No. 2 goalkeeper since 2017 when the club defeated Southampton to win the League Cup at London's Wembley stadium. The crash happened on the Carrington Spur Road through Ashton, near to the Reds' training ground.

The 32-year-old Romero was seen in pictures posted on social networks next to the auto, which was stuck under a guardrail on the roadside near United's training ground in Carrington.

His Lamborghini ended up crushed underneath a roadside barrier with debris strewn all over the road.

Romero walked away from the crash and trained as normal with his team-mates after the incident, United confirmed later. The 32-year-old football player was not injured.

United's backup keeper can be seen standing alongside his auto, seemingly not suffering any lasting damage as a result of the incident.

Despite his impressive worldwide record, Romero has found club appearances hard to come by at Old Trafford and remains as the second choice keeper and is usually only used for cup games. Because a video uploaded and shows Romero can still run. The Manchester United back-up goalkeeper has won 96 caps for Argentina but remains a back-up choice to De Gea at Manchester United since joining from Sampdoria.

United return to action on Wednesday night when they host Burnley at Old Trafford. But he hasn't actually played in the Premier League since May 2018.