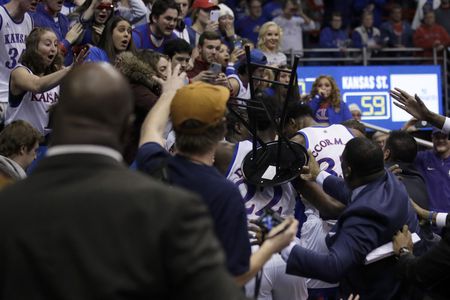 Kansas had a 22-point lead and was trying to dribble out the clock with just seconds remaining when Kansas State's DaJuan Gordon stripped the ball from Silvio De Sousa who then chased Gordon down and fouled him as he was attempting a layup. The suspension is indefinite "pending the final outcome of the review by KU and the Big 12", he announced.

A turbulent brawl overshadowed the No. 3 Kansas Jayhawks' 81-60 victory over the Kansas State Wildcats on Tuesday.

In addition to all of the punches thrown, De Sousa was seen holding a stool over his head before an assistant coach intervened and grabbed it from him.

Players who left the bench were ejected from the game. The Jayhawks' big man blocked Gordon's shot at the rim, sending the freshman crashing to the floor. And at one point, De Sousa had picked up a chair and was surveying the crowd. They were the only three to score in double figures for Kansas State.

After the game, both coaches responded to the event with regret and Kansas State Head Coach Bruce Weber said he hopes both teams can move on easily. "I'm not saying that both parties weren't in the wrong, but I know that we were in the wrong", Self said.

Braun answered with another 3 during another big run that allowed the Jayhawks to put the game away.

"There is no place for this conduct in college athletics or here at KU", he added.

As time expired in a major college basketball rivalry game between Kansas and Kansas State, a bench-clearing brawl ensued between the two squads, forcing fans to take cover.