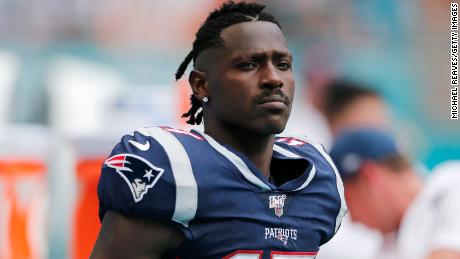 According to USA Today, public information officer Christian Lata said police have tried to reach Brown but have been unsuccessful. The alleged victim, the driver of a tractor-trailer moving truck, left the scene, according to the NBC 6 report.

An alleged victim told officers that he was assaulted by the former Pro Bowl receiver and trainer Glen Holt. A criminal investigation is ongoing, and it remains possible (if not likely) that Brown is also charged - once he is located.

The latest piece of Brown nonsense happened last Monday, when he threw sex-themed gummies at the mother of his children during a domestic dispute.

Brown's agent Drew Rosenhaus has since reportedly "conditionally" terminated his relationship with him until he seeks counseling.

The wideout's stint in the Bay Area came to an end thanks to a rapidly escalating temper tantrum over a helmet that led to him being released, and while he managed to find a new home with the Patriots, he only played a single game for New England before he was cut yet again after multiple women accused him of sexual misconduct.

Brown's former trainer Britney Taylor filed a lawsuit against Brown in September accusing him of three separate incidents of rape and sexual assault.

Help is something retired New York Giants legend Carl Banks pleaded for on Tuesday, encouraging the NFLPA and DeMaurice Smith to step in and assist Brown before things reach the point of no return.