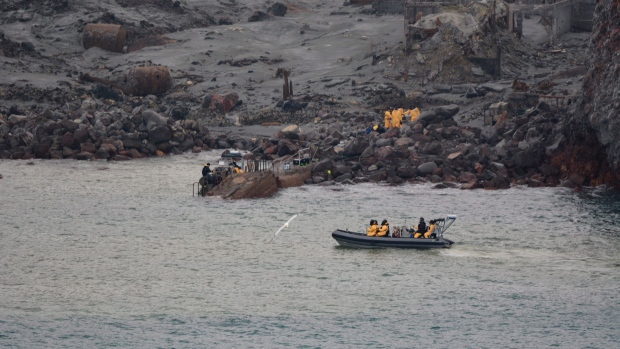 Police and navy divers have started searching the waters near White Island to retrieve the bodies of the two remaining victims of the New Zealand volcanic eruption.

Two teams of four Search and Rescue and Disaster Victim Identification staff were taken to the island by helicopter.

Drone flights helped locate the six bodies on the caldera before the operation began and the six-strong team laboured to reach them in heavy hazmat suits and breathing gear that restricted movement.

A person has died today from injuries sustained during the Whakaari/White Island eruption, Police say, bringing the total death toll to 15. "We will all be waiting tomorrow morning to ensure that the people who are putting themselves in harm's way in the interests of recovering those bodies, our thoughts and our prayers and our love will be with them".

The families cheered and expressed joy and relief upon being told of the successful recovery, Police Deputy Commissioner Wally Haumaha said.

Special forces commander Rian McKinstry said he was "incredibly proud" of the team, who had to deal with heat stress as they prepared the bodies to be airlifted out.

Scientists have warned volcanic activity has increased in recent days and the island is "highly volatile".

The eruption Monday occurred as 47 tourists and their guides were exploring the island.

Authorities have said that 24 Australians, nine Americans, five New Zealanders, four Germans, two Britons, two Chinese and a Malaysian were on the island at the time of the volcanic eruption.

"But it was just an opportunity, as they said, regardless of whether we're from Australia or New Zealand or wherever, that the moment we're one whanau (family) and will mourn everybody as if they are our own". Some of the survivors are suffering from major burns to their skin and lungs.

Three patients evacuated from New Zealand to The Alfred hospital in Melbourne are also critically ill. Australia previously said up to 10 such patients would be transferred to hospitals in Victoria and New South Wales states for further treatment.

White Island is roughly 30 miles off the coast of New Zealand's North Island and is known as a stratovolcano, characterized by continuous small-to-moderate eruptions over the past 150,000 years.

Numerous injured suffered burns over more than 80 per cent of their bodies and internal abrasions due to inhaling hot volcanic gases, a situation that obligated New Zealand to import skin and tissue grafts to treat them. Monday's eruption sent a tower of steam and ash an estimated 12,000 feet (3,660 meters) into the air.

Many of them were passengers on a Royal Caribbean Cruises ship on a day tour to the island.