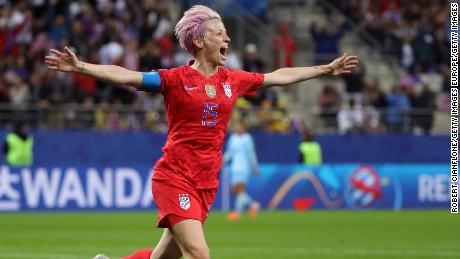 While athletes frequently endorse candidates in presidential election years, Rapinoe has emerged as a particularly vocal and prominent figure on social and political issues.

"No it's not inappropriate!"

Warren went on to congratulate Rapinoe for being named Sports Illustrated's "Sportsperson of the Year", calling the achievement "fabulous and well-deserved".

Rapinoe said she would "love to endorse you and be on your team and help in any way that I can so, consider me Team Warren".

The call to Rapinoe was in keeping with Warren's practice of placing personal calls to supporters, which has turned "Elizabeth Warren Called Me" into a meme.

She thanked Rapinoe for her endorsement in a separate tweet. You and me and all of us!

Rapinoe responds by saluting Warren's campaign for the presidency.

In an interview on CNN Tonight with Don Lemon, Rapinoe said Warren's platform brings "a different vision of America than what we have right now".

Rapinoe has been an outspoken critic of President Trump, famously saying she would boycott any visit to the White House if invited by the president.

Rapinoe explained that it was more important, however, "to show people that there's a better way forward", addressing problems with healthcare, for instance.