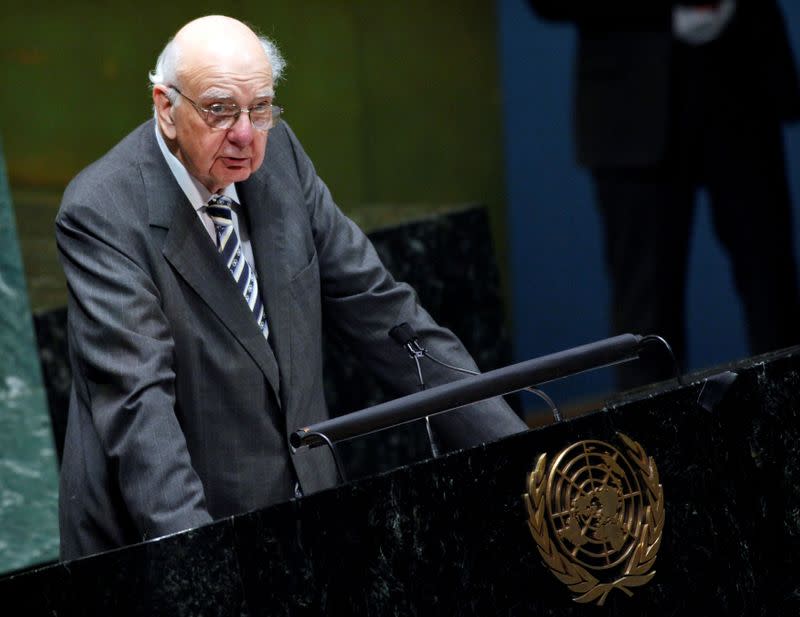 Former Chairman of the Federal Reserve Paul A. Volcker '49, who led the effort to suppress inflation throughout the late 1970s and early 1980s, has died at the age of 92.

Passed as part of the Dodd-Frank Wall Street Reform Act of 2010, the "Volcker Rule" was created to keep banks from betting on speculative investments such as mortgage backed securities that contributed to the financial crisis.

Other borrowing costs followed and the prime rate climbed to a record 20.5pc by May 1981. Unemployment rose to 11 percent and the country was steeped in economic malaise. Yet between 1980 and 1983, inflation fell from almost 15pc to less than 3pc. Angry farmers, struggling with high debts, drove their tractors to Washington and blockaded the Fed's headquarters. A USA senator demanded that he remove his "neck boot from the economy". His inflation-slaying action spurred massive protests and Volcker later conceded he had made a mistake by ordering such a major squeeze on credit.

After serving at the Fed, he worked on various boards and committees, including working to return money to the families of Holocaust victims from Swiss banks. Enron had filed for what was then the biggest bankruptcy in USA history under questions about its finances and accounting practices, and Andersen had signed off on its books. He then headed the central bank's policy board from 1979 for eight years. He gained new notoriety after Mr Obama asked Congress in 2010 to tuck the Volcker rule into the landmark Dodd-Frank financial reform law, which was meant to avoid a repetition of the 2007-09 financial crisis. It is the basis of many current financial regulations.

Beginning with his years at the Fed, when he railed against the huge U.S. trade and budget deficits and battled inflation at every opportunity, investors idolised the man.

"Probably more than what he did to break inflation, [Volcker's] more important legacy is the value of the Fed's credibility", said Heidi Lerner, the chief economist at Savills.

Volcker graduated from the Woodrow Wilson School of Public and International Affairs at the University in 1949 with a bachelor's degree, having wrote a senior thesis titled "The Problems of Federal Reserve Policy since World War II".

One of the mailed 2-by-4s ended up with an enduring legacy at the Fed: David Wilcox, a young staffer under Volcker who later rose to direct the Fed's research and statistics division, said he received one of the 2-by-4s from Larry Slifman, a former senior economist in the division, and kept it on his desk until his retirement previous year.

Born on September 5, 1927 in Cape May, NJ, Paul Adolph Volcker, Jr. was a grandson of German immigrants; he was the youngest of four children and only son of his father, Paul Sr., and his mother, Alma (née Klippel). They had two children.