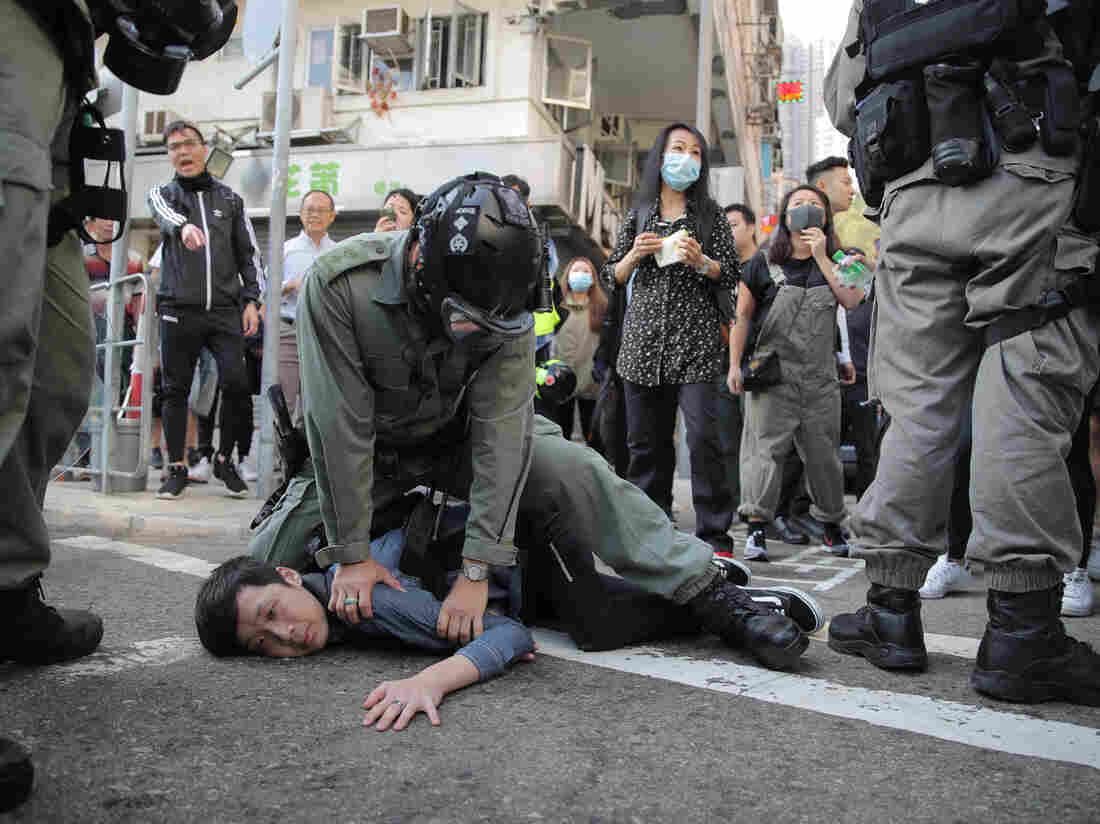 The government remained confident in its ability to contain the chaos, Chief Secretary Matthew Cheung - the city's No. 2 official - said, as he and Lee briefed reporters following morning traffic disruptions by protesters. As the students held the line inside, outside the citizens leaned in with them, forging what seemed tonight to be a new layer of protest in Hong Kong.

Hundreds of masked protesters, many of them students, hurled rocks and bricks, some launched with catapults, during Tuesday's protests.

Police subdued a few protesters as a crowd gathered for a third straight day in a central business and high-end retail district, public broadcaster RTHK reported.

Geng told a press briefing that grabbing police firearms, assaulting or threatening officers on duty were absolutely forbidden in any country and would be dealt with strong police force.

The metro station at Sai Wan Ho on eastern Hong Kong island, where a 21-year-old protester was shot at close range on Monday, was among those closed.

Numerous clashes took place at university campuses, with a large number of students joining the anti-government protests, despite Chief Executive Carrie Lam urging students to obey the law. Police said they arrested more than 260 people on Monday, raising to 3,560 the number of arrests since the movement erupted in June.

The Education Bureau said initially that parents could decide whether to keep their children at home, then later announced that classes at primary and secondary schools would be suspended Thursday for safety reasons. Gasoline bombs and fires lit up parts of the campus Tuesday night, as police battled back with tear gas and rubber bullets.

Protesters clashed with police into the early hours of Tuesday after fierce skirmishes throughout Monday, when police fired tear gas in the heart of the city during lunch hour. Officers had fired tear gas into a parking garage in Tseung Kwan O shortly before he fell from one story and sustained severe brain injuries. A man shot by police on Monday and another man set on fire by protesters both remain in critical condition.

The demonstrators are incensed about what they view as police brutality and meddling by Beijing in the freedoms guaranteed under the "one country, two systems" formula instituted when the former British colony returned to Chinese rule in 1997.

The city's 24 pro-democracy lawmakers condemned the police in a joint statement, saying the nonstop firing of tear gas had turned the campus into a "battlefield", while urging the worldwide community to speak out for Hong Kong's youngsters to "prevent the recurrence of the tragedy of 1989".

The dispute escalated, with one person pouring a liquid over the man and setting him on fire.

"The United States and Britain pretend to be fair on this incident, but it only reveals how they confuse right and wrong and how hypocritical they are".

Lam eventually withdrew the extradition bill but has insisted the violence stop before an further political dialogue can take place. "In these five months Carrie Lam has pushed Hong Kong to hell, and has used the police as a tool to suppress the people".