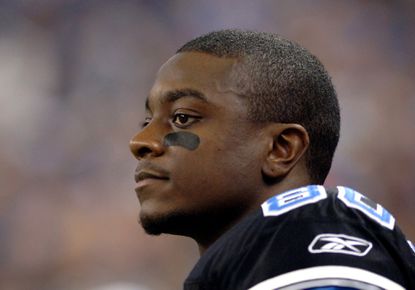 Charles Rogers, a wide receiver from Michigan State, holds up a Detroit Lions jersey after he was selected as the Lions first pick, second pick overall, at the National Football League draft Saturday, April 26, 2003 in NY.

"We are deeply saddened to learn the news of Charles Rogers passing away". Spoke along with his mother this early morning. Please pray for her and his children.

Our thoughts and prayers go out to the family and friends of Charles Rogers during this most hard time. "Rip Chuck", he tweeted.

A woman who identified herself as Cathy Rogers, his mother, confirmed the death Monday in a phone call from The Associated Press.

In a 2017 interview with the Lansing State Journal, Rogers said he became addicted to the painkiller Vicodin after suffering the injuries and blamed the Lions for getting him hooked. "From Saginaw, to East Lansing, to Detroit, Charles' connection to the state of MI and the football community was felt by many during the course of his life".

He was a unanimous All-American and the nation's top wide receiver in 2002.

Though he played just two seasons for the Spartans, his 27 touchdown receptions are still the highest mark in school history, while he ranks No. 3 in career receiving yards.

Don Durrett, a former coach, paid tribute to Rogers, saying: "I'll tell you, he was the best athlete I ever seen". In high school, he was also talented in basketball and track. Despite his dominant collegiate career, things never panned out for Rogers in the National Football League after he suffered a broken collarbone just five games into his rookie season.

But the receiver lasted only three seasons in the sport after twice breaking his collarbone in the formative stages of his professional career.