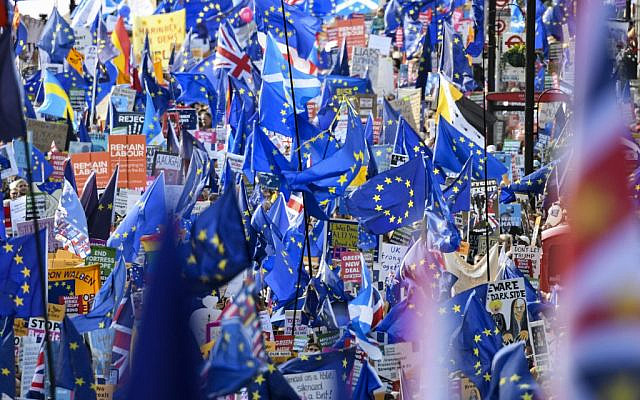 All eyes now were on Speaker John Bercow, who, in one of his final pivotal acts, will decide on Monday afternoon if Parliament proceeds with an up-down vote on Johnson's Brexit.

Having failed to get his new Brexit deal approved by Parliament on Saturday, Johnson was legally obliged to request the extension. "My ruling is therefore that the motion will not be debated today as it would be repetitive and disorderly to do so". Parliament passed an amendment forcing the government-which is not trusted by even some of its own MPs and which, remember, just threw its DUP allies under the bus-to set out the Brexit legislation in full before Parliament approves it.

The government plans to introduce its key Brexit bill later in the day Monday, with lawmakers holding a first round of debates and votes on Tuesday.

The EU, which has grappled with the tortuous Brexit crisis since Britons voted 52 per cent to 48 per cent to leave in a 2016 referendum, was clearly bewildered by the contradictory signals from London.

Whatever happens the other side of the English channel, British government ministers have reaffirmed Johnson's intention to leave the European Union on October 31 come what may and said they believed they had the numbers to get the divorce deal through Parliament this week."We seem to have the numbers in the House of Commons, why hasn't Parliament pushed this through?"

A contingent of lawmakers eager to avoid Britain crashing out of the European Union without a deal realized that even if Johnson's deal had passed, a so-called "no deal" Brexit could still happen if the bill failed to pass through both Houses of Parliament in time to become law before Halloween.

The government said Johnson fulfilled that obligation by sending a letter on Saturday asking for the postponement.

The first two letters were unsigned; after explaining in a brief cover note that the British government was merely complying with the law, Johnson included a copy of the text that Parliament forced Johnson to write.

"But the PM has made the request for an extension he promised he wouldn't make, the European Union is considering that request, and the question whether the PM and Advocate General for Scotland are in contempt of court is one for the Inner House", he said.

This weekend, Boris Johnson did the very thing he said he'd rather be "dead in a ditch" than do: request an extension to article 50 and possibly delay Brexit.

"The request was accompanied by a second letter, signed by Mr Johnson, saying he believes a delay would be a mistake".

Commission spokeswoman Mina Andreeva said Monday that "President Tusk acknowledged receipt of the extension request on Saturday and, as he stated, he's now consulting with the European Union 27".

This came as a blow to Johnson's efforts to ratify a new deal reached with the European Union on the terms of Britain's departure.

Mr Bercow provoked the ire of Brexit supporting MPs who said they had been refused a chance to vote on Mr Johnson's deal. This potential strategy was foiled by the tabling of Oliver Letwin's amendment before the vote on Johnson's Brexit deal. Adding to the political drama was the pressure exerted by the looming deadline imposed by the Benn Act, created to prevent a no deal Brexit.

On Monday, Mrs de Montchalin reiterated France's reluctance to grant the United Kingdom a Brexit extension past the October 31 deadline without adequate "justification" and added: "We are not in favour of an endless divorce process", she told the news channel BFMTV, adding that Paris would not grant London an extension "without conditions, without justification".