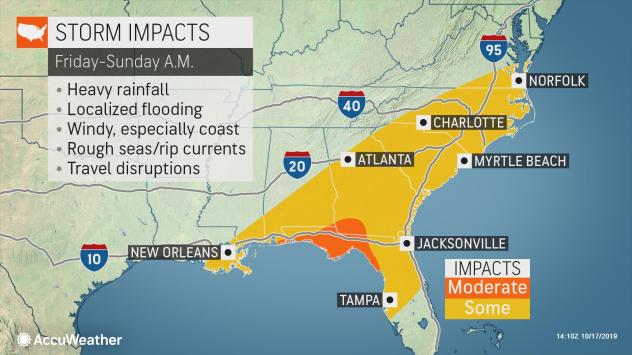 Tropical storm and storm surge warnings are in effect for parts of the Gulf Coast, from Louisiana to Florida, with Nestor expected to bring tropical-storm-force winds and life-threatening storm surge to the coast as it approaches later on Friday. It's a fast moving storm so by late Saturday into Sunday, we will be drying things out. This storm is going to be inland in the panhandle of Florida by Saturday morning. Its outer edges earlier brought heavy rain to portions of southern Mexico.

According to the National Hurricane Center, the depression now has an 80% chance of strengthening into a tropical storm, and if it does, it will be named "Tropical Storm Nestor". It gives officials the opportunity to send out watches and warnings in advance of the storm actually forming. It has top sustained winds of 40 miles per hour and is moving to the northeast at 14 miles per hour.

The system will touch more than just the Panhandle. Temperatures will remain in the low 60s to upper 50s Saturday night. "Areas north of Tampa, west of Orlando and up into Jacksonville should be on alert".

Parts of Florida that are expected to be hit by the tropical storm are still recovering from the devastation that Hurricane Michael left one year ago. It is not yet a tropical storm, but it is becoming better organized and may become a tropical storm Thursday night or early Friday.

A newly formed tropical disturbance in the Gulf of Mexico is now strengthening and heading on a direct path toward the Carolinas.

Hess and Exxon Mobil, two more major US GofM players, are watching the storm developments, but has not made any personnel moves as a result.

An area of disturbed weather in the Bay of Campeche now has a 60% chance to develop into a Tropical Depression or Tropical Storm by the end of the work week.

There have been no LOOP announcements regarding the potential tropical storm.

It's worth pointing out how quickly this storm is moving which will help minimize the overall impact, by not allowing the winds, rain, and seas from piling up on each other.