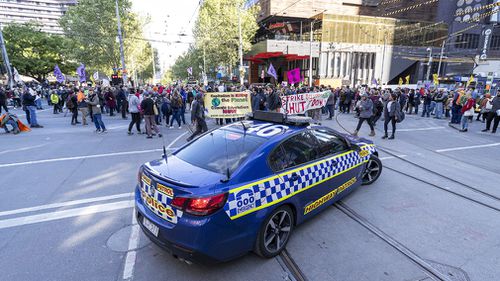 More than 1,200 protesters, who have vowed to shut down London for 2 weeks, were arrested since Monday.

The Metropolitan Police said the numbers had passed the four figure mark after the first four days of a planned two-week long protest by environmentalists.

Extinction Rebellion climate protesters on Friday blocked the main entrances at the BBC's London headquarters, with one journalist reporting that the building was on "lockdown".

Around 50 people had been arrested at London airport on Thursday, after partially-sighted former Paralympic cyclist, James Brown, got on top of a British Airways plane to stand up "for everybody's kids".

'I would like Extinction Rebellion to protest lawfully or go home and that would make it easier for everybody in the Met to provide the service we want to provide to Londoners'.

Other protestors glued themselves to the entrance of the Docklands Light Railway station serving the airport.

Extinction Rebellion activists are protesting in cities around the world, including Berlin, Paris, Amsterdam and Sydney, and are calling for urgent action on global climate and wildlife emergencies.

Emma Bateman from Lowestoft attended the protests in London with her 81-year-old mother Anne Bateman - who also made the groups flags.

Extinction Rebellion has yet to comment on Dame Cressida's comments.