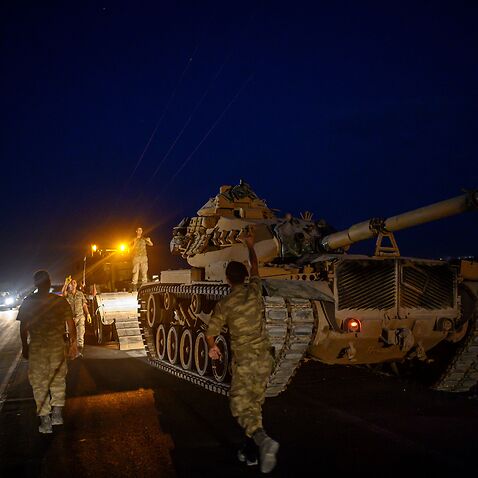 Fahrettin Altun, the Turkish presidency's communications director, called on the global community in a Washington Post op-ed published Wednesday to rally behind Ankara, which he said would also take over the fight against the Islamic State group. He expected Turkey to protect civilians and religious minorities and to prevent a humanitarian crisis, he said.

European countries called on Ankara to halt the operation and Egypt called it "a blatant and unacceptable attack on a brotherly Arab state".

The two operations were in line with the country's right to self-defense borne out of worldwide law, UN Security Council resolutions, especially no. 1624 (2005), 2170 (2014) and 2178 (2014), and under the right to self-defense under Article 51 of the UN Charter, while being respectful of Syria's territorial integrity.

Turkey has been massing troops for days along its border with Syria and vowed it would go ahead with the military operation and not bow to the US threat over its plans against the Kurds.

"Erdogan dubbed the operation as "#OperationPeaceSpring", in his tweet.

Smoke billows after Turkish bombardment in Syria's northeastern town of Ras al-Ain. The sound of planes could he heard above and smoke was rising from buildings in Ras al Ain, he said.

There were no independent reports, however, on what was being struck in the initial hours of the operation.

Turkish media said special forces and armoured vehicles led the ground invasion and had entered at several points along the border.

There were no immediate reports of casualties among security forces.

From Akcakale, the red flare of rockets could be seen being fired after dark across the border to Tel Abyad, as well as flames near the town.

Ankara says it intends to create a 30-kilometer-deep "safety zone" along its border with Syria to resettle up to 2 million of the more than 3.6 million Syrian refugees living in Turkey.

Turkey has long threatened to attack the Kurdish fighters whom Ankara considers terrorists allied with a Kurdish insurgency in Turkey. An influx of non-Kurdish Syrians would help it secure a buffer against its main security threat.

Turkey views Kurdish YPG fighters in north-east Syria as terrorists due to their ties to militants waging an insurgency inside Turkey, and an influx of non-Kurdish Syrians would help it secure a buffer against its main security threat.

"Fighting between various groups that has been going on for hundreds of years". One the next day, Washington said that the United States military would not take part in the incursion.

Earlier Wednesday, IS militants targeted a post of the Kurdish-led Syrian Democratic Forces in the northern Syrian city of Raqqa, which was once the de facto IS capital at the height of the militants' power in the region.

There has also been a chorus of worldwide concern, including from France - the top USA partner in the anti-IS coalition - and Russian Federation, now even more firmly the main foreign player in Syria.

Another Assad ally, Iran, urged Turkey to show restraint and avoid military action in northern Syria, although it said Turkey was "rightfully worried" about its southern border.

Erdogan's communications director Fahrettin Altun said Turkey had no ambition in northeastern Syria except to neutralize the threat against Turkish citizens and to liberate the local people from what he called "the yoke of armed thugs".

Turkey was taking over leadership of the fight against ISIS in Syria, he said. "Kurds in Syria. should support the Syrian army", state news agency IRNA quoted Rouhani as saying.

"Strike them with an iron fist, make them taste the hell of your fires", the National Army told its fighters.