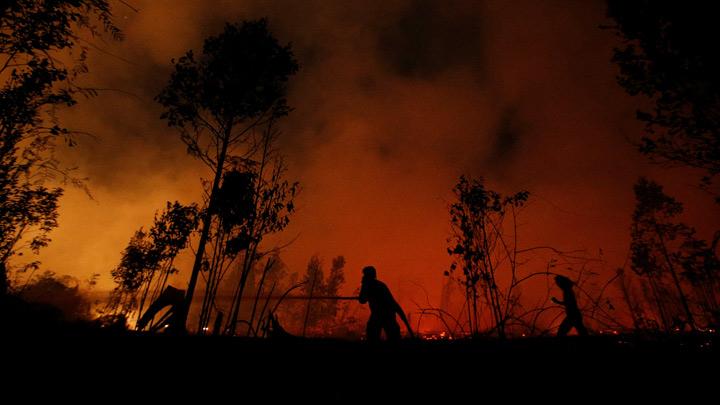 Indonesian President Widodo says almost 6,000 troops have been sent to hotspots to help put out fires.

The Indonesian Disaster Mitigation Agency said Saturday that 99 percent of the hotspots were caused by deliberately set fires.

The agency said 42 helicopters had dropped almost 240 million liters (63 million gallons) of water and 160 tons of salt for cloud seeding as part of the firefighting efforts.

The toxic smoke caused by open burning to clear land for plantations is an annual problem for Indonesia and its neighbours, but has been worsened this year by particularly dry weather.

Authorities on Monday said they had arrested almost 200 people suspected of being involved in activities that led to the out-of-control fires.

Indonesia's forestry and environment ministry said recently that authorities had sealed off at least 42 companies in the past week, including a Singaporean-based company and four firms affiliated with a Malaysian palm oil corporate group.

Jakarta has deployed thousands of personnel to battle blazes that are turning land into charred landscapes and consuming forests in Sumatra and Borneo islands, where thousands of schools have been shut over health fears.

In Peninsular Malaysia, the meteorological office and the Royal Malaysian Air Force were working together to seed clouds with chemicals in the hope that rainfall would clear the haze.

Smoke haze carried by prevailing winds has shrouded Singapore and parts of Malaysia.

Sri Aman in Sarawak hit a "hazardous" reading of 367 on the air pollutant index (API), the highest recorded since the current spell of haze began.

Air quality improved in Singapore and was in the "moderate" range after slipping to "unhealthy" levels over the weekend, officials there said.