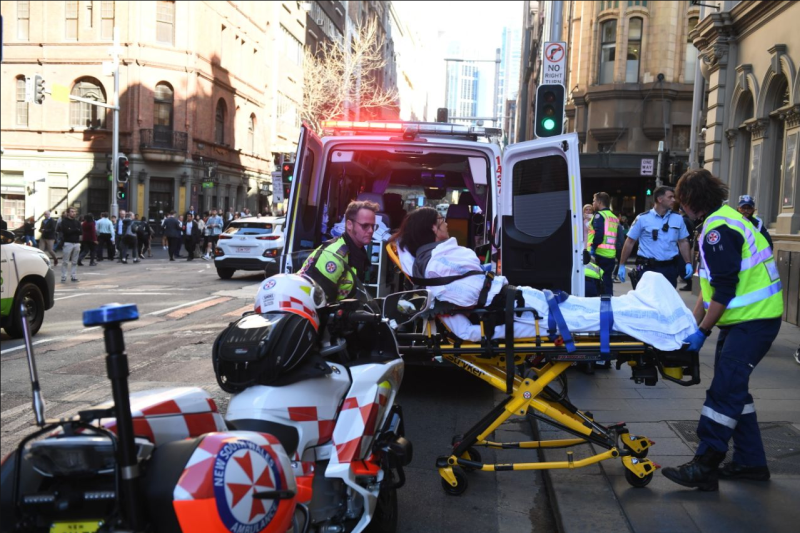 Ney allegedly threatened several people as he ran through the city centre covered in blood before his arrest on Tuesday afternoon.

In the days before the incident, Mr Ney presented at Blacktown Hospital in an agitated state and suffering severe mental health problems, but checked himself out six hours later. Police have since confirmed the incidents are likely linked.

But as cops searched for him that week, they were unaware that Ney was living in government emergency housing and could easily have been found.

Families, Communities and Disability Services minister Gareth Ward's office said he had nothing to add.

Police say the Marayong man has no links to terrorist organisations but does have some "ideologies in relation to terrorism". He is expected to be charged with murder, as well as serious assault. "He just said he had a USB and was researching, studying what was on it".

"The mental health consideration will of course occur through the potential judicial process".

"I think it's a bit over-egged, to be honest". "Police were searching for him and we had concerns, but it's still a mystery to us why we didn't get a call".

More details of Ney's increasingly erratic behaviour before the bloody CBD attack emerged on Wednesday as court documents showed he had developed a fascination for weapons years ago.

Police also found that the stabber had been carrying anti-depressants.

Ney was arrested and taken to the Royal Prince Alfred hospital for treatment.

In June, Ney pleaded guilty to possessing a weapon without a permit and he was sentenced to a nine-month conditional release order.

On Tuesday, a knife-wielding man yelling "Allahu Akbar" went on a stabbing rampage in Sydney injuring a woman.

He then allegedly stabbed a 41-year-old woman in the back at the CBD Hotel on the corner of Clarence and York Streets, before being chased and then wrestled to the ground by heroic passers who used chairs and a milk crate. She had studied at Rosebank College in Five Dock in Sydney's inner west and then at the University of Notre Dame. Ney had been her client earlier in the day, having made an appointment to see her at 1.30pm.

The footage shows the attacker, Mert Ney, walking through a back alleyway on Clarence Street in the vicinity of Dunn's house. Police believe he killed her before fleeing the block.

But their courage doesn't change the fact a murderous attack on a 24 year old woman who ought to have had her whole life ahead of her took place on Monday.