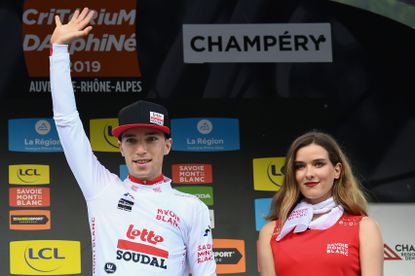 The Lotto Soudal team confirmed on Monday that promising young Belgian cyclist Bjorg Lambrecht has died in hospital in the Polish city of Rybnik following a crash during stage 3 of the Tour of Poland race.

Bjorg Lambrecht crashed into a concrete culvert in the final 100km of the third stage of the race from Chorzow to Zabrzewhere.

Race doctor Ryszard Wisniewski was quoted as saying "we don't know why he fell, it was on a totally flat road".

He was transported by helicopter to the hospital before he died on Monday. According to a spokesperson from the hospital, Lambrecht was in critical condition when he arrived.

"So we did more reanimation there where he was and then took him to the hospital by ambulance".

Race director Czeslaw Lang confirmed the death in a short speech from the usual winners podium - where all celebrations were reportedly cancelled.

Many have been sharing tributes to the young rider on social media including Britain's Mark Cavendish, Alex Dowsett and Peter Kennaugh.

He won the under-23s' version of the Liege-Bastogne-Liege race in 2017 and finished second in the U23 World Championships previous year.

Lambrecht, racing in only his second season as a top-level professional, was named the most promising youngster in the Criterium du Dauphine in June.

Unclear what caused the crash - some say weather may have been a factor because it had been raining.

Cyclingnews would like to extend its condolences to Bjorg's family, friends and teammates.