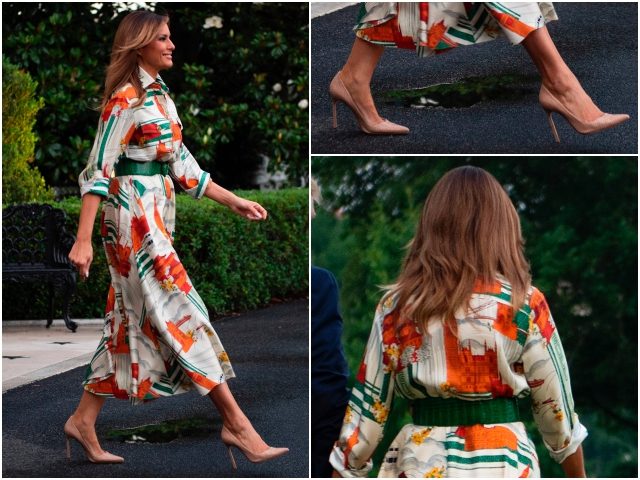 The Trumps enjoyed lunch with the Queen at Buckingham Palace after a welcome to mark the official start of their three-day state visit.

We can't say for certain that Mrs Trump is trying to fit in with the Brits - she wore a Dior gown to the state banquet last night, after all - but the choice of a trench does seem like a deliberate move. The US president shook hands with Philip while the first lady shook hands with the prime minister. Led by the Queen, who stood out in hot pink, Prince Charles was also in attendance with the President and Mrs. Trump, as well as Theresa May who looked smart in a white dress and mint green jacket.

The first lady's red gown is reminiscent of an elegant pale yellow cape-sleeve gown she wore at a dinner during last year's United Kingdom state visit.

Normally state visits see leading figures from national like the prime minister and Commissioner of the Met Police introduced to the visiting foreign leader, but it was just the three senior royals taking part in the ceremonial welcome. She also gifted President Trump a three-piece Duofold pen set using an obsidian design that was made exclusively for the queen, and a specially commissioned silver box with a handcrafted enamel lid to Melania.

First Lady Melania Trump arrives at the Japanese style annex inside the State Guest House in Tokyo on May 27, 2019.

This was the final day of the state visit and we loved the First Lady's look - she wowed onlookers in a pristine cream coat by The Row, with a matching circular based hat by royally-loved milliner Philip Treacy. Perched on top of Melania Trump's head was a sleek white hat featuring a navy band around the brim designed by her couturier, Hervé Pierre.

Her Maj shook hands with Trump and smiled before turning to greet Melania. She completed her look with Manolo Blahnik heels.