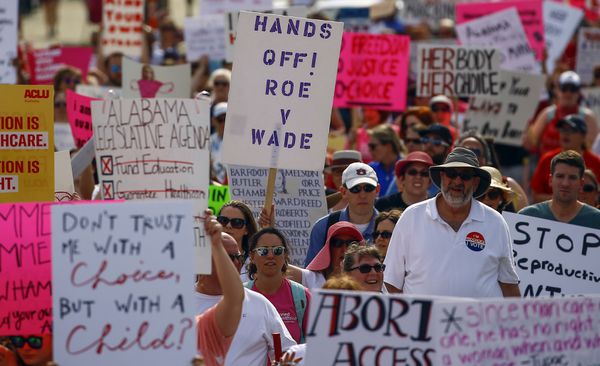 A federal lawsuit filed Friday asks a judge to block an Alabama law that would outlaw nearly all abortions, the most far-reaching attempt by a conservative state to seek new restrictions on the procedure.

Planned Parenthood Southeast along with the American Civil Liberties Union of Alabama filed a lawsuit Friday on behalf of abortion providers challenging Alabama's law that bans almost all abortions. This will provide a boost to the back alley abortion industry with all of its health risks.

In granting the preliminary injunction on Friday, U.S. District Judge Carlton Reeves wrote that the MS law, which was scheduled to take effect on July 1, would prevent a woman's free choice "which is central to personal dignity and autonomy".

While Alabama grabbed the title as the most repression state in terms of abortions after passing a ban on the procedure for practically any reason except imminent death of the mother.

The lawsuit says the Alabama law to criminalize abortion is clearly unconstitutional and would harm women by forcing them to continue pregnancies against their will.

Currently, abortion is still allowed in the U.S. thanks to the landmark 1973 Supreme Court decision in Roe v Wade, which ruled that abortions are protected up until viability - the point at which a foetus is able to survive outside the womb, around the third trimester of a pregnancy.

Planned Parenthood tweeted, "along with our partners at @ACLUAlabama, we just filed a lawsuit, challenging Alabama's outright abortion ban".

Emboldened by new conservatives on the US Supreme Court, Alabama is part of a wave of conservative states seeking to mount new legal challenges to Roe v Wade, the 1973 landmark Supreme Court decision that legalised abortion nationwide.

Governors in Kentucky, Mississippi, Ohio and Georgia have approved bans on abortion once a fetal heartbeat is detected, which can happen as early as the sixth week of pregnancy.

Anti-abortion supporters expected legal challenges, and hope the appeals will reach the US Supreme Court and allow them to re-visit federal laws.

Also on Friday, Missouri Governor Mike Parson signed a bill into law that bans abortion beginning in the eighth week of pregnancy. It does not include exceptions for rape or incest.

The law punishes abortionists who carry out the procedure with up to 99 years in prison.

The ban "threatens immediate harm to women's rights, especially considering most women do not seek abortion services until after 6 weeks", Reeves wrote in his order.

Friday's lawsuit notes that supporters of the Alabama law have acknowledged that it is unconstitutional under current Supreme Court precedent.

Alabama state Senator Clyde Chambliss, a Republican, supports his state's new law and said the whole point of the ban was "so that we can go directly to the Supreme Court to challenge Roe versus Wade".

Rep. Terri Collins, the bill's Republican sponsor, said he'd hoped all along that allegedly "ultra-liberal" groups like the ACLU might put up a fight.