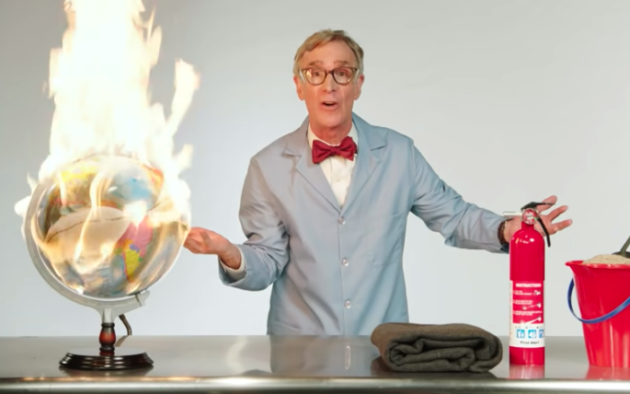 Bill Nye has a hot take on global warming

"The planet's on f***ing fire." he said, before setting a globe alight. However, Nye is no longer playing nice when it comes to explaining the danger of climate change to grown-ups. These emissions produce greenhouse gases that trap heat in the atmosphere - warming the planet up, causing ocean levels to rise as glaciers melt, and increasing the severity of hurricanes and storms. So, he urged his viewers to grow up and make tough choices. You're not children anymore, I didn't mind explaining photosynthesis to you when you were 12. But you don't have to just take that from me; instead, I'm happy to say that Bill Nye has actually agreed to help drive the urgency home at this point by actually doing one of his enjoyable lighthearted demonstrations.

"When we release carbon", Nye said, pointing to pictures of various disasters taped to a chalkboard, "all of us pay for that in the form of things like fires, floods and crop failures".

Nye torched the globe, then pointed to the sand, blanket, and fire extinguisher on the table with the globe, saying, "There are a lot of things we could do to put it out". No, of course not, nothing's free, you idiots!

Nye remarks come after the Senate voted down the Green New Deal package by a vote of 57-0. "That is seven pages shorter than the menu for the Cheesecake Factory". In the segment, Oliver explained some of the ideas in the bill and why it seemed like a good way to get a conversation going about how people can reduce their carbon emissions. "So Bill, please, please, do you have a fun experiment for us?"