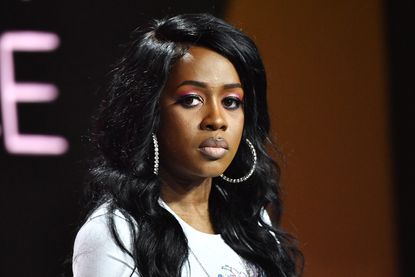 Remy Ma is now in custody after she allegedly punched Brittney Taylor at a concert last month.

Ma, who was later released on $1,500 bail, is alleged to have punched her "Love & Hip Hop: New York" co-star Brittney Taylor in the face while attending a benefit concert in downtown Manhattan in April. Speaking with the New York Daily News, Taylor claimed that she was assaulted by Remy after the Bronx rapper asked her about her involvement in an attack on Remy's stepdaughter, Dejanae. The Terror Squad rapper and her husband Papoose were spotted leaving court on Wednesday afternoon, but they remained tight-lipped about the case.

TMZ reports that while police were investigating the incident, Taylor is putting in motion a civil lawsuit against Remy by requesting cops preserve all evidence of the alleged assault, including surveillance footage.

The incident reportedly went down backstage at at Pretty Lou concert at Irving Plaza on April 16. She also received backing from hip hop veteran Fat Joe, who appeared in court to offer her his support.

Taylor's attorneys say she is cooperating with the police.

"So, here am I on my way to a very important meeting and it's hard to even focus because of what occurred last night".

'This arrest demonstrates how serious this matter is, it is real life and not reality TV entertainment.

'I tried my best to cover it up with make up and move on but that still didn't work.

As for the reason why she made a decision to take action against Remy, she apparently did it because she 'has confidence in our system of justice and will continue to fully cooperate with the authorities'.

'My Question is @remyma why did you really do this?'