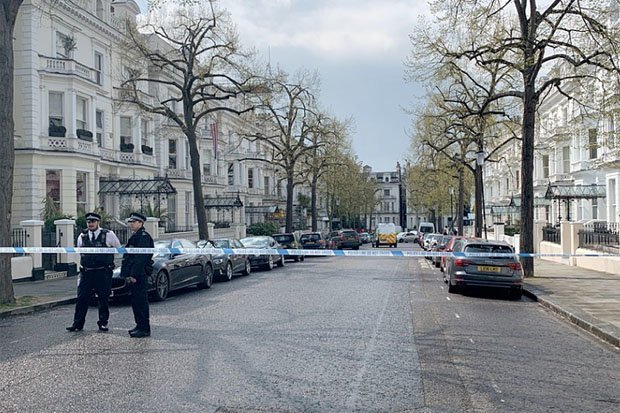 A statement from the Ukrainian Embassy said: 'Around 10 am on Saturday 13 April, the official vehicle of the Ambassador of Ukraine to the United Kingdom was deliberately rammed as it sat parked in front of the Embassy of Ukraine's building.

A spokesman for the Ukrainian embassy, said an unknown vehicle had crashed into the Ukrainian Ambassador's auto this morning and the man inside posed a threat that required British police to fire an unknown number of shots at the auto.

Chief Superintendent Andy Walker, from the Metropolitan Police's specialist firearms command, said: "As is standard procedure, an investigation is now ongoing into the discharge of a police firearm during this incident". The statement said the suspect, a man in his 40s, collided with a number of vehicles outside the embassy.

Police did not report any injuries to the suspect.

Officers opened fire in west London on Saturday morning while responding to reports of a auto collision, the Metropolitan Police has said. So far, the suspect's motive remains unclear.

Armed and unarmed officers were dispatched to the scene and had to use firearms and Tasers to stop the man after his "vehicle was driven at police officers".

The vehicle has been a focus of attention for forensics officers.

Police said they had been called at around 9.50 am on Saturday to reports of a auto having hit several vehicles in the road.

The black vehicle was heavily scuffed on its right-hand side.

The spokesman said that contrary to some reports in the media no shots were fired from the vehicle.

TV footage later showed a silver vehicle slewed across the cordoned-off road with its driver's door open and window shattered.

The Met said officers were called at approximately 8.30am to reports of a auto in collision...