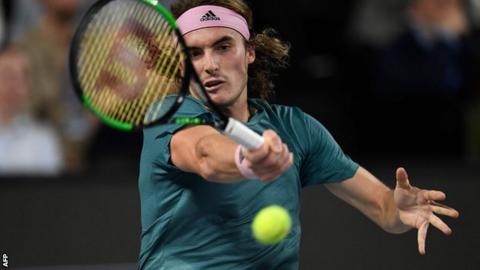 Tsitsipas, who beat Roger Federer en route to the Australian Open semi-finals last month, continued his fine start to 2019 with a victory in Marseille in a little under two hours.

Top seed Stefanos Tsitsipas is on the verge of breaking into the ATP's top 10 after he defeated Kazakhstan's Mikhail Kukushkin in the final of the Marseille Open.

He is hopeful that he will be able to win his first ATP Tour final since his maiden title at the St Petersburg Open nine years ago.

The 20-year-old, who did not drop a set in the entire tournament, fired 14 aces and won 86 percent of his first-serve points. "It is the biggest satisfaction and the biggest joy in tennis".

"I lost the spark (after the Australian Open) and I was frustrated because it felt like I couldn t find it again", said Tsitsipas.

"There was a lot of stress this week because I knew I had to face some good opponents", said the 12th-ranked Tsitsipas.

"It is important to win titles". I found my rhythm, and I found my game when he served at 6-5.

Kukushkin survived an early break point but could do nothing when serving to stay in the first set at 6-5.

World number 12 Tsitsipas had his first break point when 2-1 up in the opening set but failed to grasp the opportunity as he sliced a backhand wide, with a similarly wayward shot ensuring Kukushkin held.

After failing to convert his first break-point opportunity, Kukushkin claimed the opening break of the second set at 2-2 with his second cross-court forehand victor of the game.

Tstisipas improves to 2-2 in finals (he won 2018 Sydney) while Kukushkin falls to 1-3. The World No. 12 improves to 2-0 in his FedEx ATP Head2Head rivalry with Kukushkin, adding to his three-set win over the Kazakh at the Dubai Duty Free Tennis Championships a year ago.