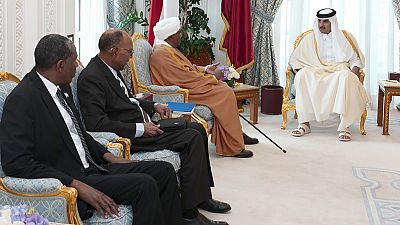 The 24-year-old man died from his wounds in Omdurman, a city across the Nile from the capital Khartoum, where crowds were railing against Sudan's three-decade ruler Omar al-Bashir.

Oil Minister Azhari Abdel Qader announced that his country "accepted it as a normal matter between friendly countries in light of the current circumstances that Sudan is going through".

Deadly protests have rocked Sudan since December 19 after a government decision to triple the price of bread.

Some foreign journalists have been prevented from reporting events in the country.

Bashir and Qatar's emir Sheikh Tamim bin Hamad Al Thani discussed "the current economic crisis experienced by Sudan and Sudan's efforts to get out of the crisis and the role of brothers in general, and Qatar in particular, to help Sudan", Sudan's Foreign Minister Al-Dirdiri Mohamed Ahmed said.

Sudan's Information Minister Bishara Jumaa said on Wednesday, in an interview on Saudi-owned broadcaster Al Arabiya, that the government has "taken steps" to end the economic crisis and that "by March, God willing, matters will be completely resolved".

The official death toll from over a month of unrest stands at 26, including two security personnel.

Footage aired by Qatar state television showed the two later meeting at the palace, al-Bashir accompanied by an entourage of government officials on his first trip overseas since the protests began.

"Police dispersed them with tear gas". However, the opposition and global rights groups, including Amnesty worldwide, say the toll has surpassed 50.

"He obviously needs help and they (other allies) haven't been able to provide it", said Fraihat.

The State Department urged the release of those who have been arbitrarily detained and a credible and independent investigation into the deaths and injuries of protesters, as well as a "safe and secure environment" for public expression and dialogue.

Since the protests began, more than 800 people have been arrested, including journalists, activists and opposition party members, a Voice of America report said on Wednesday.

The statement was the first by Washington after a month of mushrooming protests in what is widely seen as the biggest threat to President Omar al-Bashir's 30 years of iron-fisted rule.

Many protests were reported in Gezira state and witnesses said demonstrators had blocked the main road in al-Nuba district, also south of Khartoum.