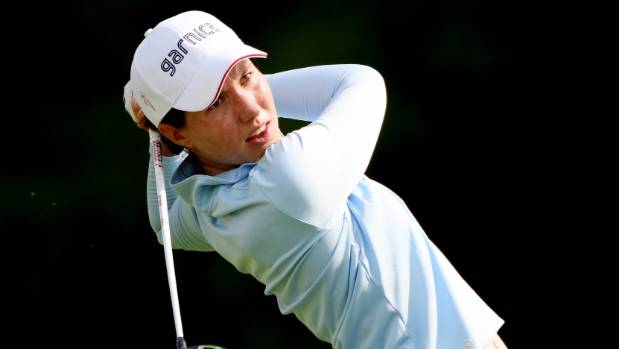 Maria Torres is aiming to stylishly cap a rookie season that Hurricane Maria nearly denied her. Torres shared the first-round lead on 6 under at the final women's golf major.

Katherine Kirk is three shots off the lead after the first round of the final women's major for the year.

The 21-year-old converted six birdies on the day, including four of her last six holes.

However, Torres took a different route, playing the last six holes in five under thanks to a birdie-birdie-eagle run that saw her charge up the leaderboard.

Hall will head into the weekend with high hopes of winning back-to-back majors as she lies just two strokes off the pace at the halfway stage, with four players sharing the lead on eight under par.

The 22-year-old world number eight has dropped only one shot over the first 36 holes of the year's final major.

"My long game was really good, I just couldn't really hole that many putts so that was a little bit frustrating", said Hall afterwards. "She got me covered".

The first golfer from Puerto Rica to play on the LPGA Tour, and the first to compete in a women's major, Torres couldn't stop smiling after a 69 despite a disheartening bogey, bogey opening.

One shot back, Carlota Ciganda of Spain carded 70 to follow a 65 that only Torres equalled Thursday.

Austin Ernst (70) is also two shots back, completing her round minutes before Hurricane Florence made landfall close to her home state SC.

But Law's travails were nothing compared to world number one Park Sung-hyun, who hit seven bogeys in a six-over-par opening round of 77 to leave her languishing in joint-97th place. "It's more flooding (risk) where I am".

World No 5 Lexi Thompson plays a shot out of the bunker on day two of the Evian Championship.

American amateur Rachel Heck, who is only 16, made the cut at her second major. She swiped her club in frustration after a scuffed chip that led to a bogey-5 and a round of 75. A 73 got her to 1 over.