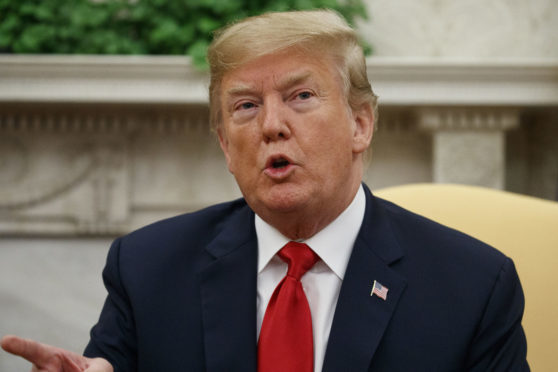 Theresa May has revealed that Donald Trump advised her to "sue the European Union" rather than negotiate with the 27-country bloc in a private conversation that the U.S. president referred to during his visit to the United Kingdom on Friday.

During Friday's joint press conference with Prime Minister May, Trump announced that he provided May with a suggestion concerning Brexit that she apparently found "too brutal". "Sue the EU. Not go into negotiations - sue them". "Don't walk away from negotiations because then you're stuck".

Mr Coveney said that hard negotiations lay ahead but that the Brexit process has moved from the "politics of parliaments" to the negotiating rooms of Brussels.

Amid mounting Tory anger over her proposal for a "common rule book" with the European Union on trade in goods, she acknowledged she had been forced to make changes to her original plans by Brussels.

Ms May also thanked the US President for his support over Russia, which Britain has blamed for a nerve agent attack on a former Russian spy in south-west England in March.

The Prime Minister disclosed that she has twice taken Mr Trump's hand - at the White House past year as well as at Blenheim Palace during his visit to Britain - to "help" him negotiate steps.

Her message comes ahead of crucial votes in the House of Commons on trade and customs policy in the coming week, during which the government is likely to be under pressure to get them through Parliament. I'd rather not tell you what that option is, but I think she might.

"I think he is a great representative for your country".

Anti-fascist groups and political activists were joined by many others who say they had never demonstrated before.

Trump revealed he had given May advice on how to conduct the talks with Brussels during an at-times surreal press conference alongside the PM on Friday.

Mrs May finally revealed what Mr Trump had told her.

She added: "But the legacy of Brexit can not be a hard border between Northern Ireland and Ireland that unpicks the historic Belfast Agreement".

With less than nine months to go before the United Kingdom is due to leave the European Union on March 29, 2019, the country, the political elite and business leaders are still deeply divided over what form Brexit should take.