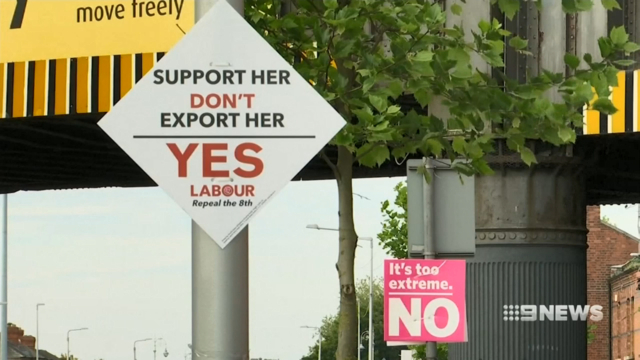 Ireland has voted to repeal the Eighth Amendment of its constitution, two major exit polls are projecting.

The Irish Times and RTE television exit polls suggest the Irish people have voted by almost 70 percent to repeal a 1983 constitutional amendment that requires authorities to treat a fetus and its mother as equals under the law.

The exit poll showed "an overwhelming desire for change that nobody has foreseen", wrote The Irish Times's deputy political editor Fiach Kelly.

Hosted by David McCullagh, he will reveal what the the Behaviour & Attitudes exit poll found after interviewing 3,000 people across the country, immediately after they voted.

The government's vote count begins at 9 a.m. on Saturday in Dublin.

Voters will be asked on Friday if they wish to repeal a constitutional amendment inserted following a 1983 referendum that enshrined the equal right to life of the mother and her unborn child, and to enable parliament to set the laws.

Between 12 and 24 weeks, abortion will be available only in cases of fatal foetal abnormality, a risk to a woman's life or a risk of serious harm to the health of the mother.

It now appears Ireland's politicians will soon be able to change the law to allow women to have abortions.

Another Irish Times article reported that voter turnout was extremely high, possibly higher than it was when Ireland voted to legalize same-sex "marriage".

Deputy prime minister of Ireland, Tanaiste Simon Coveney, said in response to the preliminary polling, "Thank you to everybody who voted today - democracy can be so powerful on days like today - looks like a stunning result that will bring about a fundamental change for the better".

However, the referendum was also held against the backdrop of a proposed law to introduce unrestricted abortion upto 12 weeks of pregnancy.

"It's hypocritical, degrading and insulting to Northern Irish women that we are forced to travel for vital healthcare services but can not access them at home", she said.

The Lib Dem leader said: "Since there is, effectively, direct rule from Westminster, the government has responsibility and it can and should take the opportunity to deal with this issue properly". Getting an illegal abortion within Ireland can lead to a life sentence in prison.

The liberalisation campaign gathered momentum in 2012 after an Indian dentist, Savita Halappanavar, died in hospital in Galway aged 31 when she was refused an abortion during a miscarriage.

The law was tweaked in 2013 to allow terminations if the mother's life is at risk.

Ireland's main anti-abortion campaign, Save the 8th, has conceded defeat as exit polls suggest a massive victory for the Yes voters of the country's historic abortion referendum.

Abortion will not immediately be available to women within Ireland after the referendum result is confirmed.