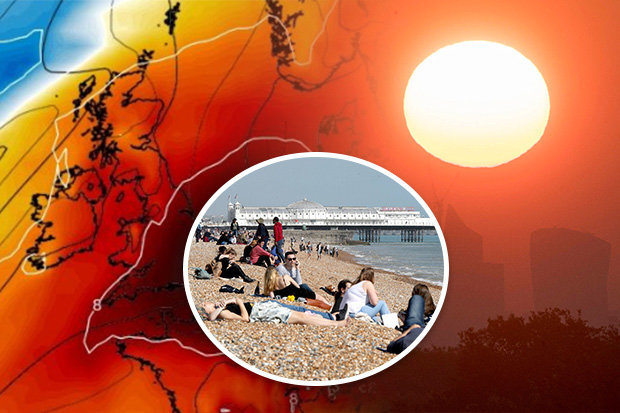 The Met Office said it was "almost guaranteed" to be the hottest early May Bank Holiday Monday since 1999.

In Brighton and Hove temperatures are expected to reach 23C on Saturday, according to the Met Office.

The Met Office said the conditions are being caused by an area of high pressure which is due to dominate southern Britain over the coming week.

Sun-seekers across England are in for a treat this weekend as temperatures on Bank Holiday Monday look set to break records.

Sunday is set to see temperatures heading towards the 20 mark.

'But whether or not we will beat the record for the whole weekend put together, we'll be close, but at the moment looking at it we may just come short'. Widespread temperatures will be in the low to mid 20s.

The South East can expect the highest temperatures, while Wales and Scotland will also see those in the mid to high 70s.

The heatwave is being caused by hot air arriving from 30C southern Russian Federation, the Met Office said - weeks after "Beast from the East" cold air from the same region froze Britain.

It comes as temperatures could reach as high as 28C in some parts of England on Monday as the three-day weekend concludes.

Then, it was warm and sunny in Northern Ireland and parts of Scotland but cool and cloudy in the south and east.