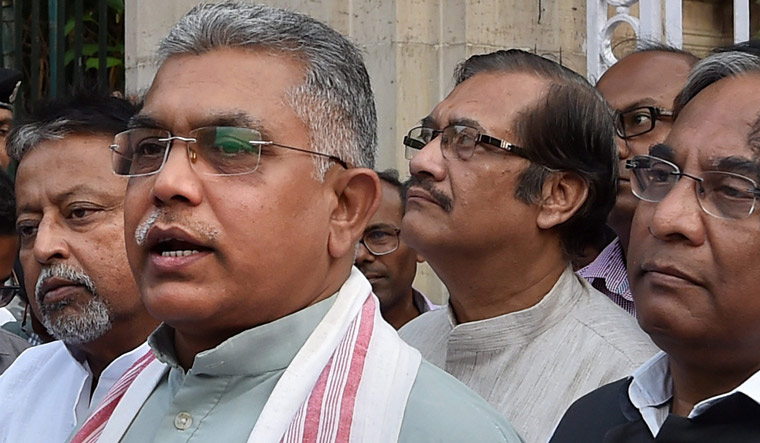 On Wednesday, April 4, state BJP president Dilip Ghosh claimed that our legal cell has filed an appeal at the Supreme Court for a fair and violence-free panchayat election in Bengal.

The AITC on its part is accusing the BJP of instigating the violence. Trinamool Congress and BJP clashed with each other in Bankur's Onda area.

The ruling party in the state has unleashed violence against the BJP candidates and their families are threatened and dissuaded from contesting the Panchayat elections on the party symbols, it added. We will plead before the apex court to ask the state election commission to request for central forces.

The party also held a demonstration in front of the State Election Commission office over the issue.

A BJP delegation, too, met Singh to urge him to deploy central forces for the elections.

BJP general secretary Sayantan Basu told newsmen at Suri in Birbhum district there was information that the TMC had "engaged people having links with the banned Students Islamist Movement of India and terror outfit Islamic State to prevent its members from filing nominations". They are trying to throttle democracy. A BJP leader was dragged out of the SDO office at Hooghly's Arambag and thrashed on the road.

Rahman (21), a Trinamool Congress supporter, was caught in a crossfire between two rival groups of the ruling party over candidate nomination. Counting of Votes would take place on May 8. He was taken to a local hospital before being shifted to Bankura Sammilani Hospital. On Monday, too there were stray instances of violence in Midnapore, Behrampore and Burdwan.

The Congress party, on the other hand, filed a PIL in Calcutta High Court seeking court intervention on conducting Panchayat polls peacefully, including the extension of the entire process of election, alternative place for filing nomination and deployment of central forces during panchayat polls.

The BJP has accused AITC of thrashing it's cadres at the Sutahata block office.

Armed men allegedly of Trinamool chased BJP candidate from Bankura's Ranibandh, Ajit Murmu, with bombs soon after he came out of the block office on filing his nomination.