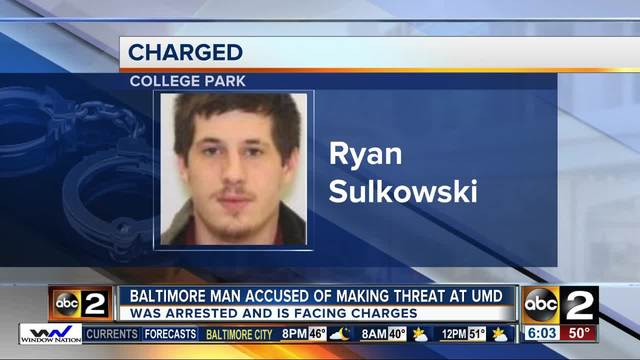 - A University of Maryland student was arrested for making threats against police officers, officials say. University Police Chief David Mitchell told WTOP Monday that they learned of the threats on Friday: "He was going to shoot UMPD police officers and make our children orphans".

An unidentified person informed the police of Ryan Sulkowski's behavior and he was taken into custody after an investigation.

Sulkowski was given an emergency evaluation by doctors on Saturday who found he "is not a threat to himself or others", according to his lawyer.

Mitchell said the police did the right thing, given "today's environment, given that Mr. Sulkowski could ... walk into a sporting-goods store and buy a shotgun, cash and carry, and walk out - no waiting period".

Sulkowski's attorney, Gary Bernstein, said Sulkowski disputes those claims and said he did not have any guns in his apartment in College Park, nor at his parents' home, and that he never applied for a gun permit. A recent mass shooting at a high school in Florida has heightened fears on school campuses. "And we stopped him before he could do it".

Bernstein said Sulkowski is no longer enrolled at the University of Maryland, that he withdrew from the school and returned to his parents' residence in Towson.

Bernstein claimed the order to charge Sulkowski came from above the university police.

Bernstein said Sulkowski has withdrawn from the university.

He added, "It probably had to be [done], even though I'm a criminal defense lawyer", saying that administrators "don't want to be portrayed like the sheriff in Broward County".